Vitaly Mutko and his infographics

Both text and video performance of minister of sport Vitaly Mutko already spread over all social networks in Russia and YouTube. Alex Kapterev pointed out an interesting story in Mutko’s speech before the FIFA.

As Alex wrote, «I try not to think about the speech itself, but one the last slides by Mutko was genius». We are talking about this slide: 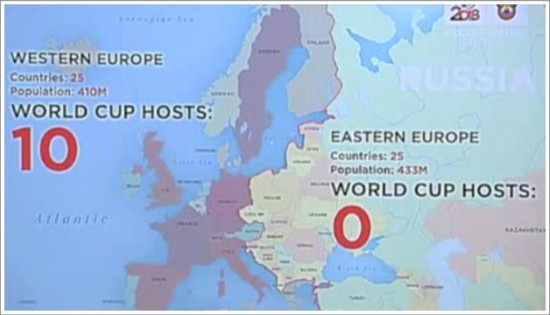 Statistics is the strongest argument. But visualized statistics is even a stronger one. Eastern and western Europe are equal in population and in number of countries. But they aren’t equal by the number of World championships that took place. Our Ministry discovered this fact, worked on it, and made an absolute killer slide with clear message.